Spent in the best way possible.

With MnMs - cause we can't scrap without them, even if we need to fight hoards of children for them. 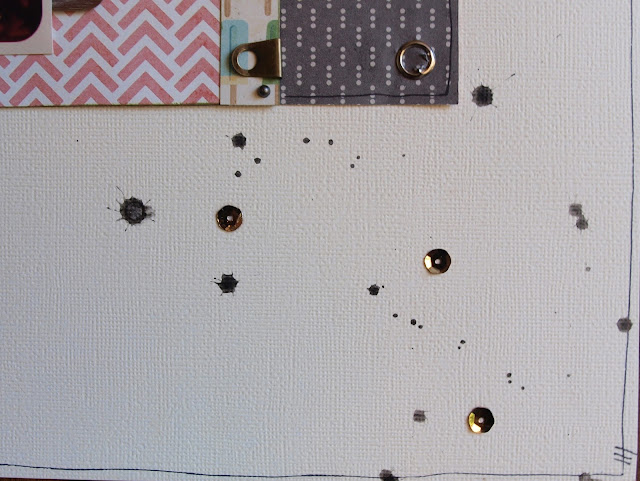 sequins, I hope they are here to stay

And for some reason, I gots my double on... 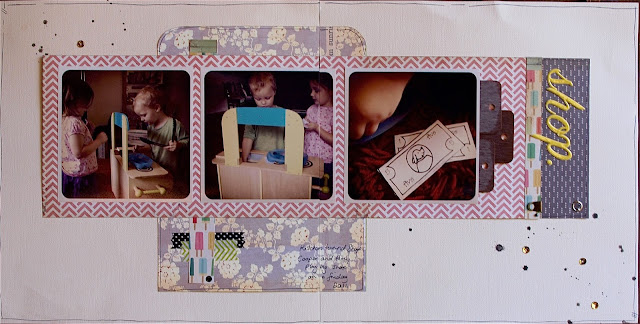 When I started scrapping, all the rules had already been broken, and doubles had already seemed few and far between. I have only done a handful in the past 4 and a half years I have been scrapping.
My favourite was one I received a HM for in masters comp a few years ago.

My favourite until now.

I seemed to have gone very simple lately - Simple eclectic I call it. But normally I have a cluster or 2 somewhere. I didn't even realized it doesn't have my normal cluster on it until I was down loading my photos. This is far more simple then normal. Buts sometimes thats ok 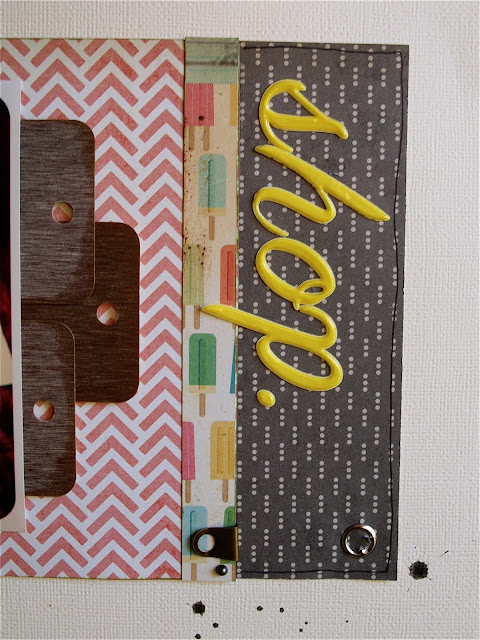 My most favourite Thickers - a few years old now called Rainboots, I was hoarding the last few letters I had until Beth got a whole heap for me from a discount rack!

Now thats a true friend, adds to your scrap stash and shares MnMs with you..........

The wooden tags - laminate bench samples from Bunnings on the backside.

A long time between ports

I haven't really shown my scrapping on here for quite a while, but there has been action behind the scenes.

Scrap camp even!!
And I even thought I might give masters another twirl. Though my calender weighs a ton, hate to think about about how much it's going to cost to post!!! 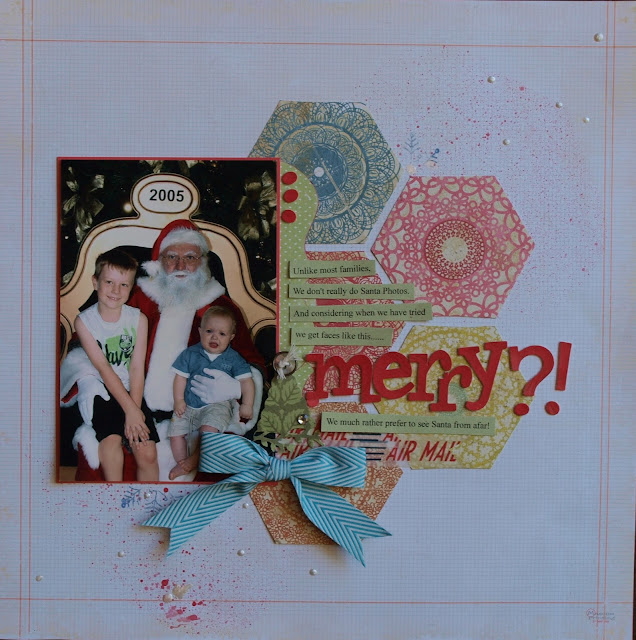 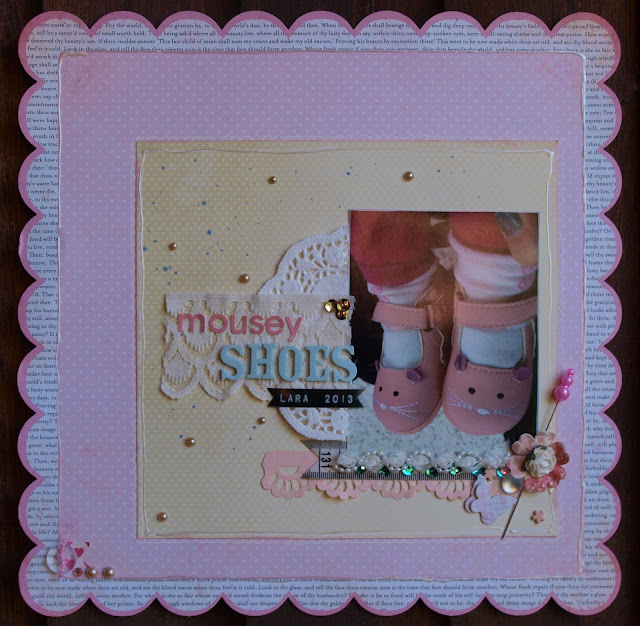 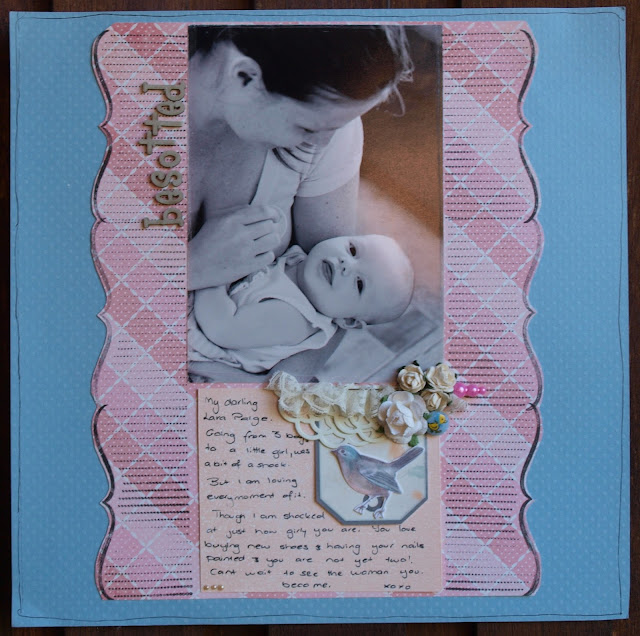 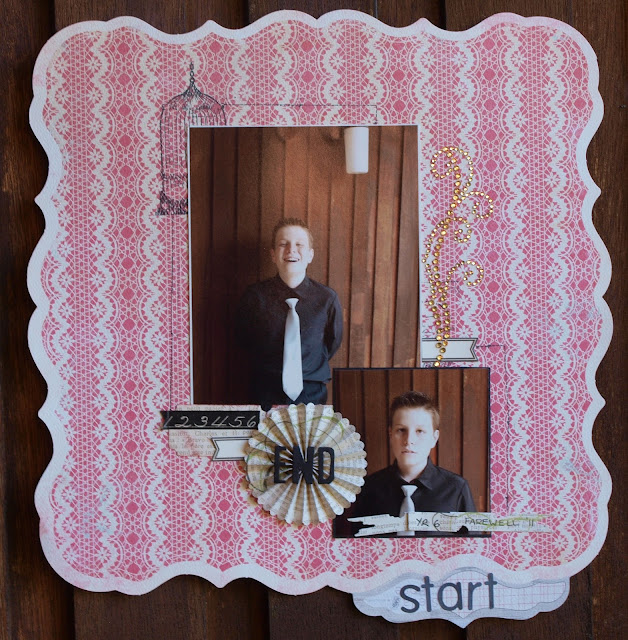 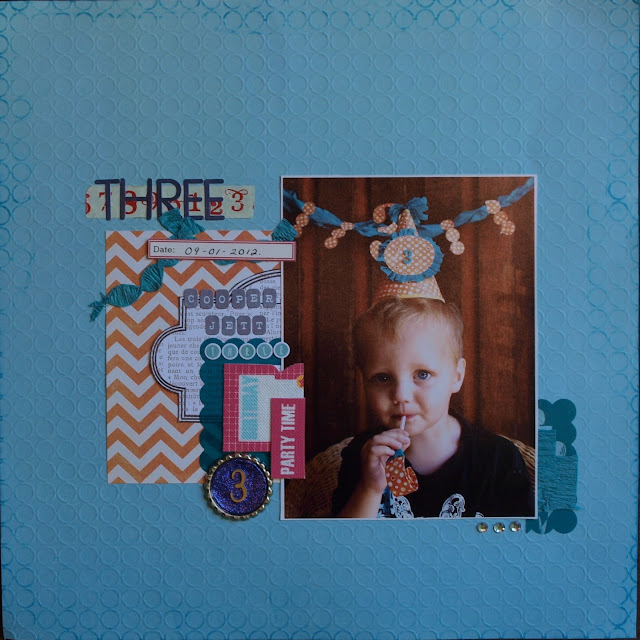 Just noticed these have sun reflections on them, I was planning on retaking these anyway. Im having a few issues with my camera. I think I need a new lens...
Anyone have a suggestion fro an allrounder lens on an Oly body?
Posted by Sarah Lou at 11:20 PM 4 comments: 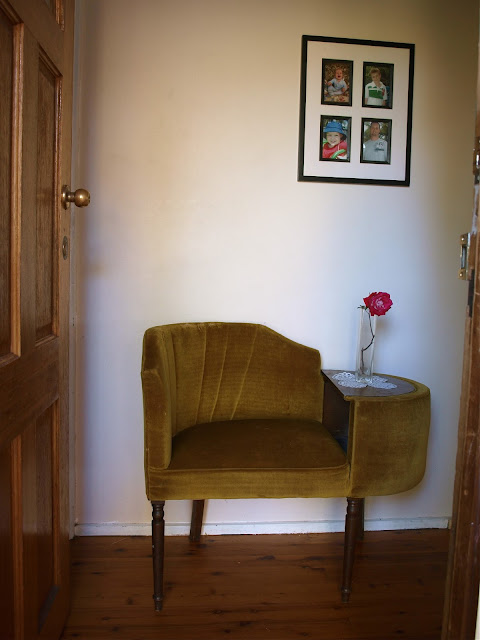 I was taking photos of my layouts, when I realised that I hadn't shown my roadside treasure!
On a Betherday ( one a month Beth and I try and do something fun - that month was a big bush walk to see waterfalls)  we drove past a huge pile of council pickup joy.  - We love a good roadside pickup and we slowed down and were gobsmacked someone threw out this beauty!

There is a lil wear and tear on the bend of the seat, and there is talks about recovering it, but truthfully I love it just as it is for now.

And it makes the perfect entrance table.

We struggle on weekday mornings.
Give us the weekend when we can wake at 9:30.
Weekdays are for the birds.

I dont expect anything of the kids in the mornings. I learnt quickly that if I want a smooth calm morning, there was no need to clutter it with unnecessary jobs  — for all of our sanity.

The alarm goes off at 8 ( 7 if you are the unlucky teenager) , we get up get dressed, eat some breaky and leave at 8:40. Somedays I hit the snooze button, so we do all that with just 10 minutes less.
The snooze button is for that Tyler child. It turns out I just gave birth to myself in male child form with that one.

No matter how early he goes to bed, mornings — well they just suck for him.

Everything about mornings is function only, which is why I often look like death warmed up walking the kids to school.

But I still get people smiling at me as we walk by. Why.

Cause to quote Cooper "good boys gib their mums flowers for their hair, so they can be beautiful" 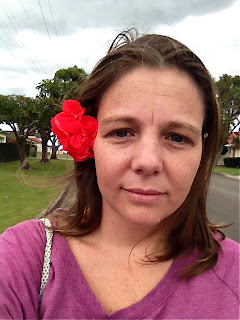 So this tired, no make up bad selfie photo is one of my favourites, cause my boy says im beautiful. Even if it is taken during the evil hour that starts with a 8.....

Sometimes you just need to run away.

My poor husband works hard.
At work, At home, At Teaching Guitar and Playing gigs
And for the most part he is easy going. Doesn't believe in getting angry, says it gets you no where.

So when the cranks start to eek into our life, and they are cranks that getting sent to his studio does not get rid of. I know its time. 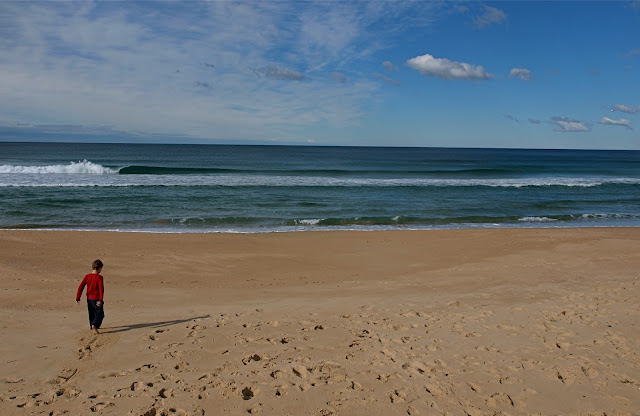 We are fortunate that his sister has a holiday house. No where fancy and the house is basic. But it's not home, and its near the beach and near a place that sells pizza bigger then my baby girl.

Once I finally persuaded him to take the week off, he started making plans.
He wanted to work on his deck — which worked for me, (I had my last barista class and I teach cake decorating on a Wednesday), but Thursday and Friday - clear and free.

And he knew how much I had been wanting to take the kids to Cockington Green. Plus in his mind, it was ONLY another 2 and a half hours to the snow and it was the start of Aussie snow season! 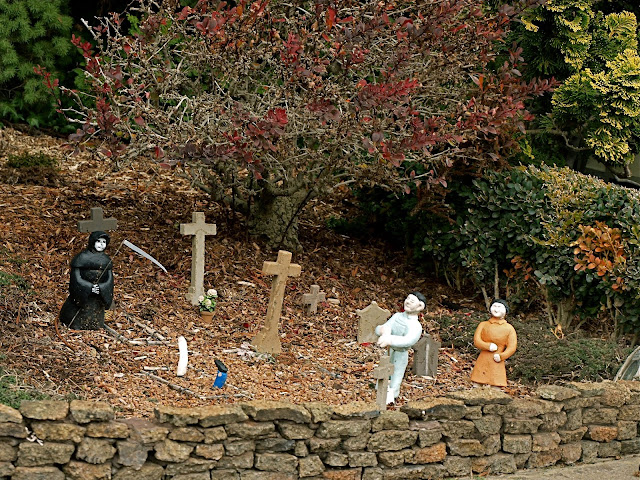 Cockington green was fabulous. I often struggle with finding things that will keep my range of ages happy ( I have one in every age gap at the moment, except baby), but this was a happy medium. There were things to find ( Jason is alive and well chasing people with his chainsaw still, and the grim reaper waiting for his next victims) 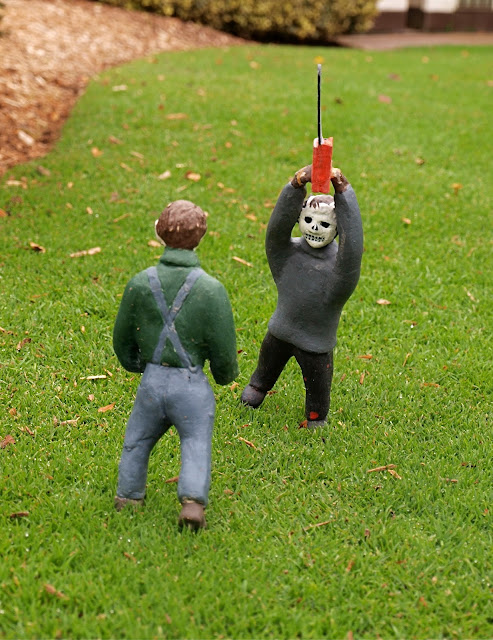 We did talk about doing the dinosaur museum which is next door but they had enough outside for the kids to see that kept everyone happy. 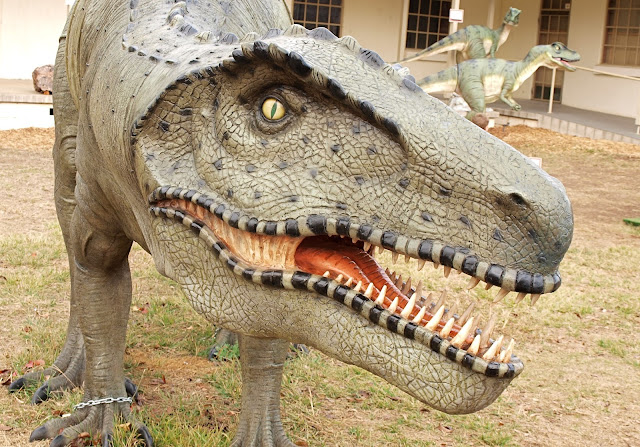 And then the next drive. We made it to perisher just as the sun was fading and — the worst start to snow season ever. We found just enough snow to throw a snowball, at charlottes pass where the wind blew so hard it pulled the car seat lose when we opened the door. Thats just enough snow for us I think. No photos, it was quick, fast and furious out there!

Being a beach house — the next day there was no way we could leave without a walk to the beach. And maybe on the way to the beach I might of passed a couple of op shops...... 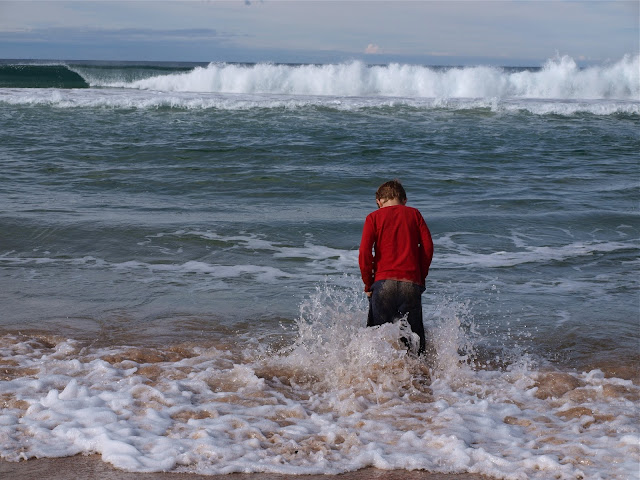 So a walk to the beach it was — which is how my water addicted boy managed to throw snowballs and swim in the surf in less then 24 hours......... 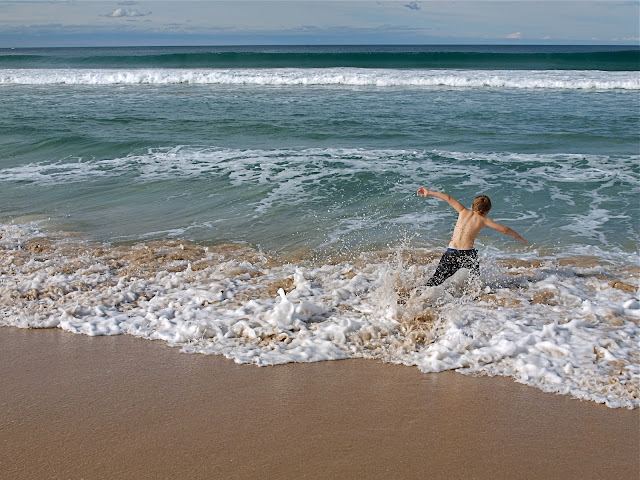 Sarah Lou
Western Suburbs, NSW, Australia
Just me, slightly crazed mumma of 3 boys ( 14, 8 and 4) and one itty bitty girl, who is trying to live her life the best she can. Sometimes she reads, sometimes she crafts, sometimes she bakes and eats, she also might be slightly addicted to her camera these days. One day she is hoping to figure out what she wants to be when she grows up ( and no, 34 is definitely not to old for that)